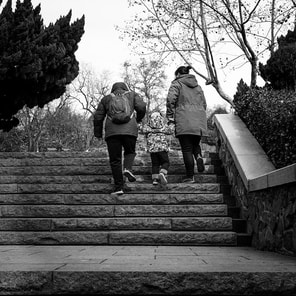 Adoptive Parents
​For some, adoption is the very first choice for family building.  For others, adoption is a second choice after infertility, one which they may struggle to embrace.  There are considerations that come up in adoption more or less universally and some that apply specifically to people coming to adoption after infertility.

If an infertile individual or couple decide to adopt,  the temptation can be to rush, feeling of course like they are already behind at the starting gate.   Contemporary adoption, however, demands a great deal of prospective adoptive parents and truly requires the grief of infertility to be addressed and worked through before attempting it.  Adoption is quite a fraught and complicated process in and of itself and can easily rub someone where they are already raw.   Survivors of infertility --- as individuals and as couples --- need to feel clear they have arrived at a place where they can welcome a child not of their biology with joy and without ambivalence.

There are many junctures at which adoptive parents might find therapy helpful:
As their child grows older they may exhibit both skills and challenges for which the adoptive parents have no frame of reference, having not experienced them in their own families of origin.  Keeping the family cohesive and cultivating a loving connection with a child that has talents or interests that baffle you can be difficult, but aided with therapy.

​Adopted Adults
I have worked with several young and older adults who were placed in closed adoptions who wanted to prepare for a birth parent search.  They often have profound worries about what they may find out about their origins and the reasons why they were placed.  They might worry they will find nothing at all and be left with the task of trying to integrate an unsolvable mystery into the core of their being.  Many worry terribly that a birth parent search will cause their adoptive parents to feel hurt or dismissed and get stuck between protecting their parents and feeling entitled to know the truth of their own origin.

An adult adopted person once told me quite poignantly that for her "love and loss live in the same place inside me."  I have heard this observation echoed by several others.  Regardless of how well loved they have felt by their adoptive parents, regardless of the goodness-of-fit with the family with whom they have been placed, for some there is a sadness that comes up when they start close committed relationships.  The relationship itself is often the best place for healing, but compassionate and informed therapy can aid the process.

We know from research that closed adoptions have been particularly difficult for the women who place, which is why trends have moved toward open adoption.  That said, open adoption has not been an easy or simple solution and while outcomes are generally better, many birth parents struggle to feel entitled to know their children even to the extent promised through contact agreements.  Boundaries can be difficult to feel out and the emotional landscape of the family to which they are now forever joined can be difficult to map.  Often just the murkiness of the role --- who am I exactly in this extended family? --- ​is a starting place for therapy.